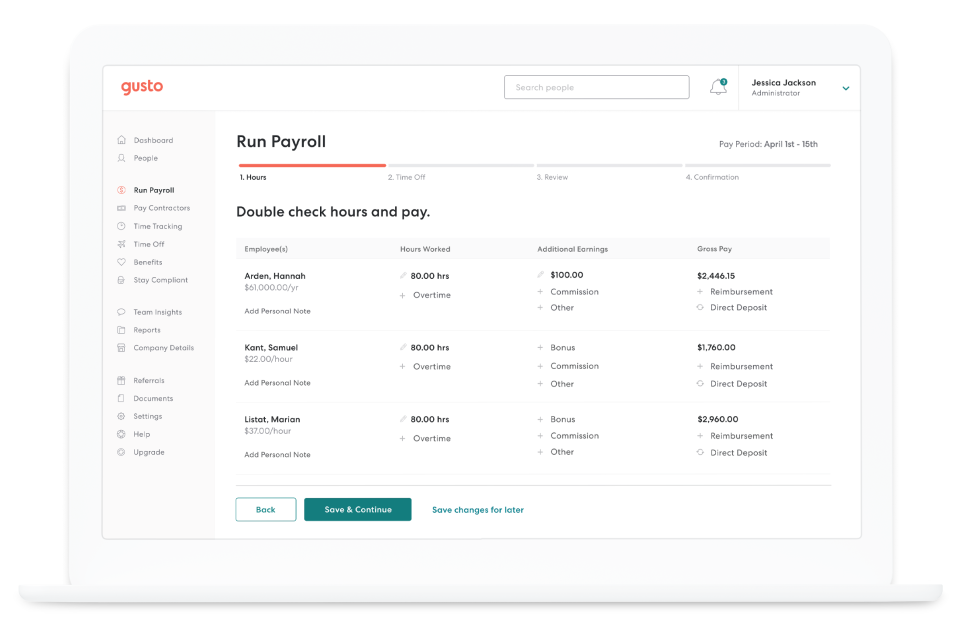 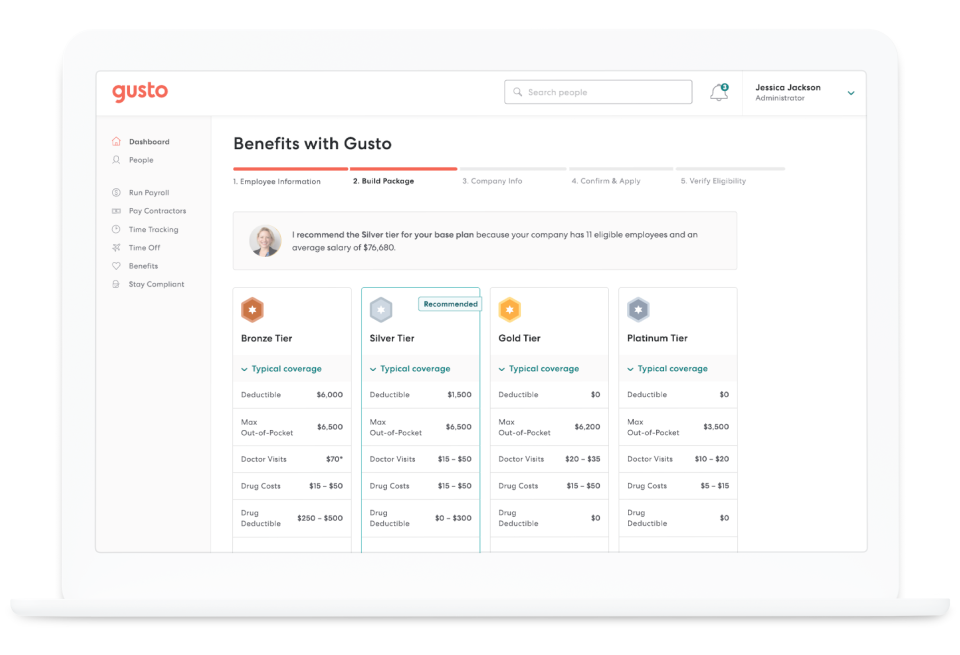 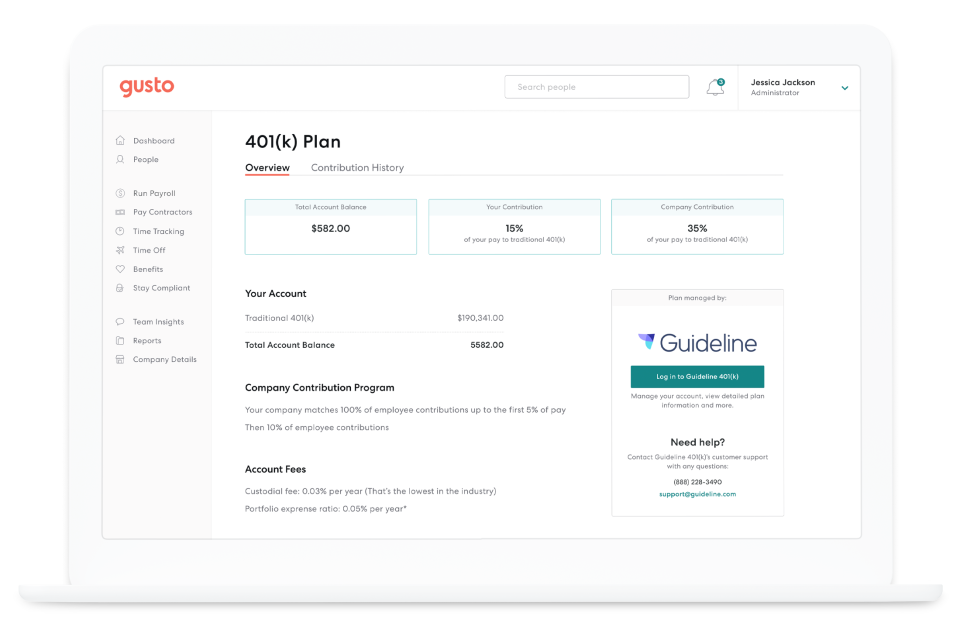 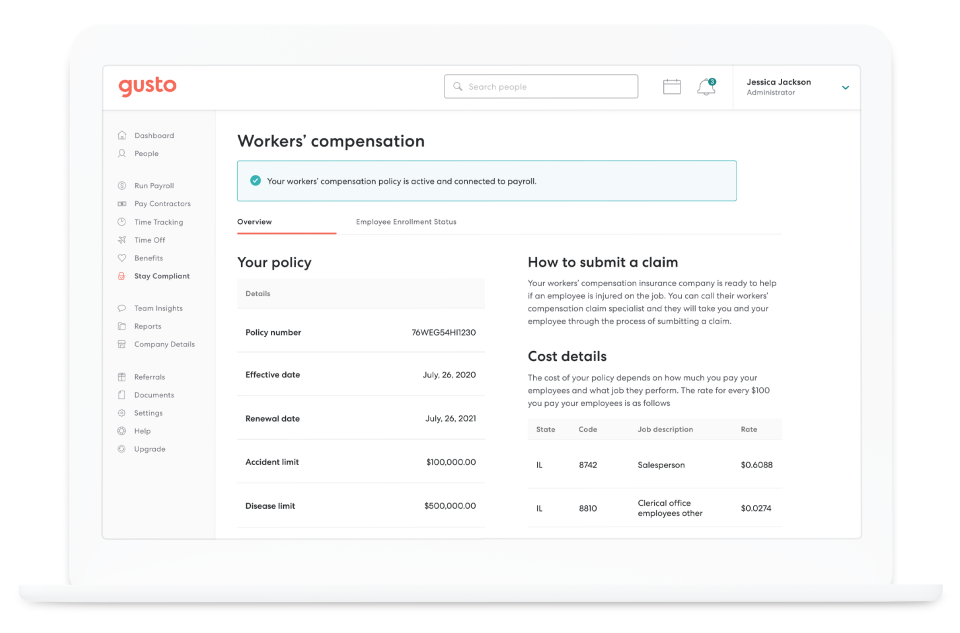 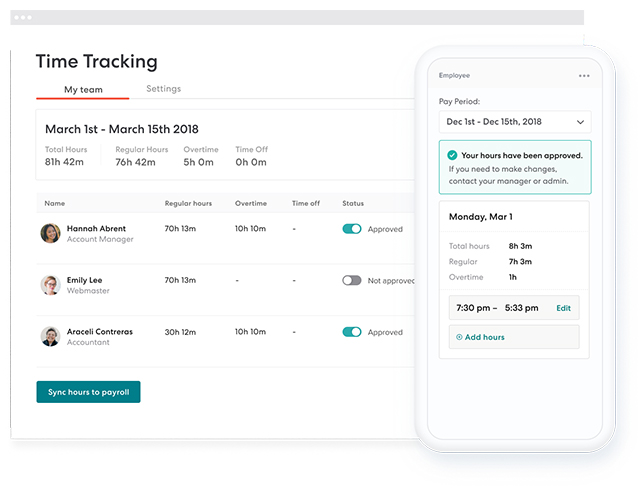 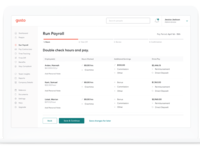 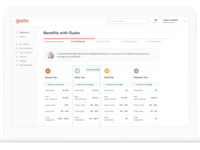 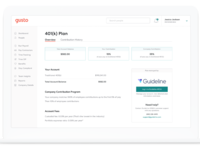 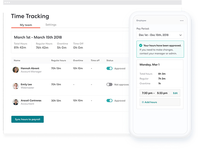 Comentarios: Customer support is great. This is a good company. They aren’t the cheapest. And they aren’t the most expensive. I think the extra cost is worth it to ensure compliance.

Puntos a favor: Gusto is easy and straightforward to use. But it doesn’t sacrifice accuracy for ease. What I like most about Gusto is that it makes it easy for small businesses to be legally compliant with complicated wage laws across jurisdictions. I haven’t found a legal error yet — and I can’t say that about any other payroll software or service I’ve worked with over the last 15 years.

Contras: I wish the price didn’t jump up so much for time clock feature. Getting clients to use the integrated time clock can be a challenge, and it creates unnecessary problems. It should be included in the base fee.

Comentarios: Overall Gusto has been great for our company. We save time and money handling payroll in-house, as opposed to paying an outside service to do it for us. And we have peace of mind that Gusto is there to support us when/if we need it.

Puntos a favor: Gusto has been a great resource for us to handle our own payroll processing & HR management in-house. It is super easy to set up and manage and has a really intuitive user interface. Onboarding new employees is a snap, time-tracking is simple to manage for both employees and managers, and running payroll only takes us a few minutes twice a month. Having employees able to manage their own banking info and paycheck splits and W4s has saved our HR dept a ton of time and headaches. And we love having an online library of company forms and documents we can distribute to employees quickly and easily. Also, their customer support is amazing. We are signed up for the Conceriege level service and have a dedicated team of customer service people who are knowledgable and friendly and responsive and have helped us out with innumerable questions.

Contras: Moving from our previous payroll processor (ADP) to Gusto was easy, because we decided to do it at the beginning of a new fiscal year. The one issue we did experience was in setting up our company's Federal and State tax filing details. Gusto does not assist you with this, so we had to track down all of our company's employer account #s and UI tax rates and filing frequencies for the 3 different states where we have employees and manually enter it into Gusto. We ended up making a mistake on one state's filing frequency, which ended up costing us a bit of $$ in penalties. It would have been nice if Gusto had been able to assist us with this as part of the switch over from ADP. Also, Gusto does not offer benefits administration in our state (yet). Hopefully that will be coming soon, as it would be nice to handle payroll and benefits through one platform. And they could cut down on the number of "recommended" services from affiliated companies that pop up on the admin dashboard these days.

Comentarios: It has been a life saver. I hate doing payroll and they do all the work for us.

Puntos a favor: The ease in which we can enter and keep track of payroll issues.

Contras: Insurance issues need to be explored so that we have more to offer our employees.

Comentarios: The world has caught up to Gusto. It is just a run of the mill self-service payroll firm. Comparing any self-service firm to a full-service firm, the self-service firm will win on cost, though that is about it. In addition to losing on Customer Service, the constant annoying sales pitches and calls regarding HR benefits as well as the firm charging for simple improvements, such as adding paid-for time tracking is a severe detriment. The fact that it has now morphed into a Payday Lend is the last straw for me. I do not trust Gusto with my firm's or employee's data and am extremely happy that I never moved any healthcare or other benefit systems to their control. I have been with the firm since our beginning, but will be moving on to another system as soon as possible.

Puntos a favor: This is one of the many common low-cost self-service payroll solutions. It allows you to pay your Employees and Contractors and handles virtually all of the taxes and processing of payments to the taxing authorities. The interface is on par with the many other UX/UI's in the industry. As is industry standard, Employees are emailed all end of year documents automatically. The company also offers access to two-day payroll processing.

Contras: Customer Service is terrible - an absolute nightmare. When mistakes are made by Gusto, they are hard, if not impossible to fix and/or get them to admit to. The firm has attempted (and mostly failed to my knowledge) to enter the higher margin HR platform and benefits fold. The firm has also just begun predatory lending at rates advertised as 1% which are actually as high as 45.63% (per their own fine print). The Customer Service in this area (from my limited exposure) provides misleading at best and false at worst information. This used to be a great firm, but there was an initial turning point where it began to focus more on marketing than the system, which then led to the constant sales calls for HR and other insurance services, which has led now, to Payday Lending. There had been an Intuit integration issue that seems to have finally been solved. Additionally, the firm has the same problem with missed payments and 941 misfilings that other full-service platforms have, however the customer service is severely lacking and resolutions take forever. The platform also can not handle an employee working in two states (more common in the North East). The cost for paying contractors is too high which limits the usefulness of the system overall - forcing a company to keep Employee Payroll, Contractor Payments, and expense reimbursements on separate systems. I have also received tax filings from another firm as their own CSR system combined two threads and had to speak to the a